President of Saica Group, Ramón Alejandro, appointed as an Honorary Officer of the Most Excellent Order of the British Empire 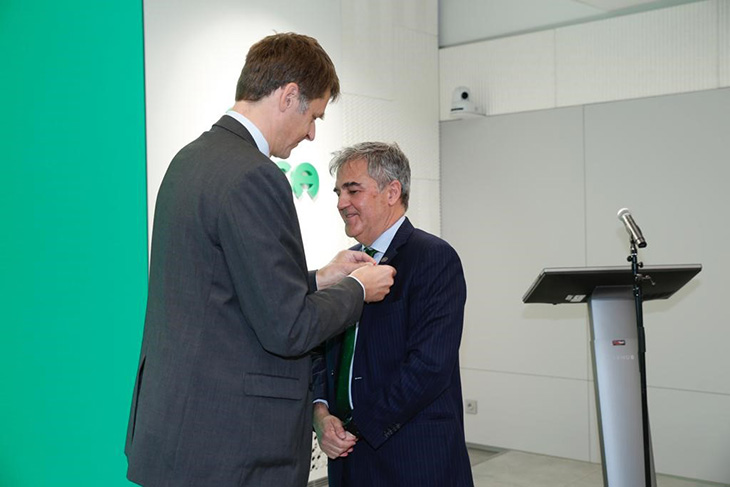 President of Saica Group, Ramón Alejandro, appointed as an Honorary Officer of the Most Excellent Order of the British Empire

The honour was awarded by the UK Ambassador in Spain, Hugh Elliott, during a medal ceremony at Saica headquarters in Zaragoza. The presentation followed a visit to the Saica Paper mill in El Burgo de Ebro, also attended by representatives of the UK’s Department for International Trade.

During the visit, the guests were given a tour of the plant including the PM10 machine, off-machine coater, waste-to-energy facilities and state-of-the-art automated warehouse.

The United Kingdom awards Orders and Medals to those who go above and beyond for the community or country. The OBE is awarded to individuals performing a distinguished regional or county-wide role in any field, through achievement or service to the community including notable practitioners known nationally. Other notable recipients of the honour include David Beckham, JK Rowling and Keira Knightley.

In 2006, Saica entered the UK with the purchase of corrugated packaging plants. In 2012 Saica then opened what is still the most modern paper mill in the country, also known as PM11, in Partington. This milestone was key to integrating its sustainable closed loop model in the UK and joining up its existing Saica Pack and Saica Natur UK business divisions. In 2015, it also started in the world of flexible packaging with Saica Flex, which now operates from five locations in the UK.

In 2021, Saica opened a sorting plant in Partington to clean and sort 100% of Greater Manchester's collection of over 80,000 tonnes per year of paper and cardboard, an investment of £9 million.

In the coming months Saica Pack will be opening a £50 million flagship facility in Livingston, Scotland, another demonstration of its commitment to the British market for the long-term.

During his acceptance speech, Mr Alejandro spoke of the strength of the bonds between the two countries, and of how Saica’s people work with creativity and commitment every day to overcome common challenges, from those posed by the Covid-19 pandemic to the ongoing fight against climate change.

Ramón Alejandro, President of Saica Group, commented: “It is a true privilege to receive this honour. We have had a very special relationship with the United Kingdom since we entered the UK market in 2006. Today we can proudly say we operate from 23 sites in the UK – more than any other country outside Spain – and employ over 2,300 people there. Since our entry, we have invested more than £700 million into the UK market and we continue to invest for the long-term.”

The British Ambassador Hugh Elliott said: “It is an honour to see Ramón Alejandro appointed as an Honorary Officer of the Most Excellent Order of the British Empire (OBE), for his services to the environmental sector in the United Kingdom. 16 years have already passed since Saica entered the British market and since then its business has expanded extraordinarily: today Saica is one of the largest Spanish investors in the UK creating sustainable packaging solutions at its 23 plants in the UK, that have created more than 2,000 jobs in the last 10 years. But Saica's contribution to the UK goes beyond jobs and economic growth. It also plays a key role in the environment and in the fight against climate change, making the circular economy and "zero waste" their raison d'être.”